We are gearing-up for the ride of our lives. My big sister (bestfriend) are close in age and I have to admit, while growing up we gave our parents a run for their money! I truly believe what goes around comes around and when I became pregnant with my first child, I said to myself, "Phew!" "That was a close call!" I was so relieved that it was a boy. I WAS SPARED! I thought. We would not be tormented by hormonal, overly-sensitive behavior, In other words... LITTLE BITCHES! Face it, girls, we are. And whoever thinks otherwise is basically a bitch in denial. There's nothing wrong with it! Embrace it and use with caution! So, I thought raising two boys close in age would be a breeze compared to raising two girls. Until NOW!

This past weekend was spent with the grandparents, delighting in the spring air at the Algiers River Festival. It was a really nice time. We enjoyed the bands, the food, the people, and the arts and crafts. To my surprise they were serving vegan friendly burgers at one of the food stands. Being the "Skinny Bitch" that I am, I was extremely thrilled about this!

My boys really enjoyed themselves, even my 8-month-old who is overly-anxious to go wherever his big brother goes. I think he'll start walking at 9 months. My grandmother, bless her soul, would be very proud. She constantly bragged about my Dad being able to walk at this age.

The festival took place by the Mississippi river on the opposite side of the levee. It was really nice being able to watch the river boats go by. My 2-year-old got a kick out of it! But what caught his attention and made him nearly figure out how to escape out of the 5 point harness buckle from his stroller, was watching his Dad sliding down the levee on a piece of cardboard! Being that I'm also a kid at heart, I too thought this was going to be way-more-fun than sitting around watching boats go by.

When I first met my husband, I knew that we were meant to be, that we were a match made in heaven. He has such a competitive drive, you can actually see it pulsating through his veins! Growing up I too was a competitive, free spirited individual. I'd try almost anything that would challenge my inner Janet Guthrie. What sucks is that I have scars on both knees to prove it. Who said I was good at everything?

As for my 2-year-old, I think he's inherited the same competitive, free spirited gene. Which one of us he got it from? Only God knows the answer to that question. I'm now preparing myself for what is yet to come. I may not have precocious, inconsiderate little brats to deal with, but what I do have are undaunted, little stunt devils who will have their momma on the edge of her seat, biting her nails till they bleed, and praying each day that they both make it home in one piece. 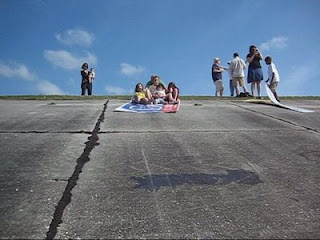 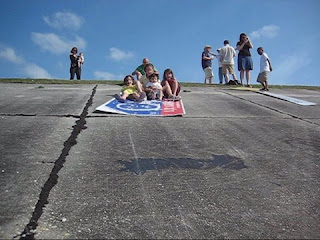 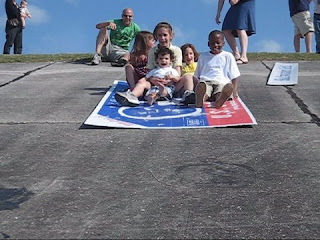 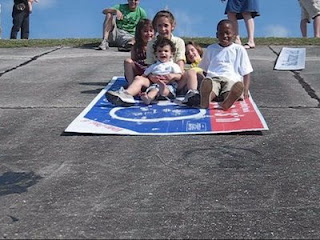 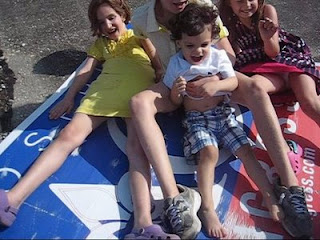 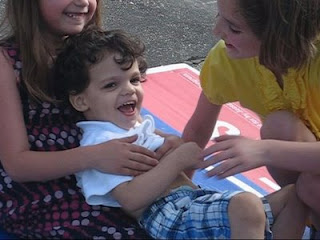 Posted by pokerfacemom at 10:52 AM