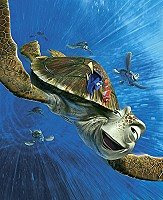 "It's like he's trying to speak to me, I know it. "Look, you're really cute, but I can't understand what you're saying. Say the first thing again." That part in "Finding Nemo" is hilarious! When Squirt, a baby sea turtle, is explaining to Marlin, Nemo's dad, how to jump out of the East Australian current. It reminds me of my 2 year old. He is a 'talking machine' right now and sometimes I can't understand him. And he is sounds SO cute! There are times when it just breaks my heart when he tries to tell me something that is so exciting to him, and he desperately wants to share it with me, but I think he thinks I'm to much of an idiot to understand him!

Just the other day we were visiting my sister in Pass Christian and my little boy heard something outside that he totally recognized. And he ran to me to share what he thought he heard. I don't think he knew for sure what it was, but he had a pretty good idea of what it could have been. This is what he said to me. "Mommy, Mommy!" "Au due papa whaa daa noyy!" "Au due duh whaa da noyy bmm!" It was as clear to me as the time when I consumed to many margarita's and was conversing with my husband about why the world is round and not square! I must have looked to him as though I was sent to Earth from a different planet and did not understand a lick of English! I was trying my very best to understand him. I had the most oblivious look on my face. I wanted to cry! At that moment, I had heard the sound he was speaking of. It was the sound of a train! (Choo! Choo!) Then he screamed with excitement! "Yes!" "Yes!" "I hear the train!" I remember feeling as though I had experienced something so exhilarating!

I have become my child's student. Paying close attention and listening to every vowel and every consonant he speaks. Trying to put them together to solve a riddle, and to my son a magnificent discovery.

Thank you for your interest in my posts.
Posted by pokerfacemom at 11:54 AM