...And I don't even think I waited 24 hours before I went into panic mode. I immediately sent out a KRUSTY Alert. Asking anyone if they've seen a small, grey and white cat sporting a pink collar, to please notify me and to keep a look-out for her.


During the early hours I thought nothing of it. She's a cat. Cats go on prowls all the time. FOR GOD'S SAKE, GET A GRIP ON YOURSELF! She'll be back sooner or later. Consciously telling myself this didn't do much good. Regardless of my tiny inner-voice's efforts, my imagination went spiraling into a crime scene as I find myself compelled to solve a mystery, with or without a corpse. I'd say; I may have watched too many episodes of American Horror Stories the previous night which resulted in a pool of negative energy engulfing me, or simply paranoia. But, for whatever reason, in my mind I was convinced that Krusty was killed and devoured ferociously by something CREEPY.

It's not unlikely. You see, we now live in Fulshear, Texas within a golf course community, surrounded by dense woods, lakes, rivers and farmlands. There are said to be coyotes, bobcats, and alligators on the prowl. Not to mention Texas Chainsaw Massacre was based on a true story.

A few hours went by and Krusty was still nowhere insight. Thankfully, I had my family only a text away for support who suggested that she could be enjoying a bush-meal somewhere. Then, a few MORE hours later. Okay...Some other person is feeding her Pâté.

It is now DAWN. I began to Google every possible predator known to wilderman and native American in the state of Texas. Including The Great Horned Howl.  The great horned owl is a year round presence in eastern Texas and prefers open woodlands along with farmlands. (So, POSSIBLY A GOLF COURSE?) This is the only type of owl that makes a meal out of skunks on a regular basis. The great horned owl will also kill and eat osprey chicks, small mammals (SMALL MAMMALS! Like, a small house cat?)  birds as large as herons, and reptiles like snakes and lizards.

I continued to enlighten myself about these MAGNIFICENT creatures. Thanks to Larry Page and Sergey Brin we now can brilliantly fill our minds with every bit of information, confirming that our irrational thoughts can be quite logical, making us feel sane again. I further proved my insanity (I meant SANITY) Googling image after image, video after video, wiki after wiki... on The Great Horned Owl.

Then, it dawned on me. A few nights ago I saw something swoop down into the darkness from an adjacent tree in our backyard while soaking in our hot tub. Say around 10ish. "WHOA! I THINK IT'S AN OWL! SO FREAKIN' COOL!", I proclaimed in my drunken voice. "By the way, where's Krusty?" Then I recalled a couple mornings ago stepping on poop outside our back door. It had disintegrated into an ash-like substance after kicking it off with my shoe. Eeeewww, Yuck...What strange poop, I thought to myself. *Googling* g-r-e-a-t  h-o-r-n-e-d  o-w-l-'-s  p-o-o-p  i-m-a-g-e-s *enter*

These owls are fearless towards humans AND CATS!


The title to this video:
"Neighbors fear owls are eating small dogs and CATS"


And this image of the great horned owl's poop, called pellets, IS ALL THE PROOF I NEED. It is the replica of the poop I stepped on.

Bingo!
I'm closing in.
I suspect my cat was a fancy feast for an Owl.

That night, I got up every hour to check outside. I kept imagining her head being ripped apart and devoured by a Great Horned Owl. I somehow kept hearing her constant faint cries inside my head. Meowwww, meowww...meowww... "Krusty, Krusty? Is that you?", I rambled on and on in my sleep.

Then, the following morning, before I can say I NEED COFFEE in my zombified voice,
I proceeded to open the back door... 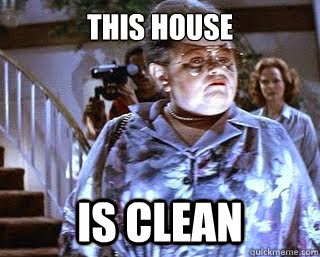 Posted by pokerfacemom at 11:41 AM