I'm absolutely convinced that all drivers in Kuala Lumpur has the game of Chicken on their brain. What's astonishing is to witness drivers who are the proud owners and behind the wheel of a BMW, Porsche, Mercedes-Benz, Bentley, Ferrari... who actually want to play the game. It's one thing risking your life and the lives of others, but it's another to survive the crash only to watch your money, and more importantly YOUR SOUL, dwindle down to nothing.


"When In Rome Do What The Romans Do"

I, regretfully, confess that I’ve turned into one of those lawless, reckless, balls-of-steel, 'Malaysian Style' drivers, who also has the game of Chicken on the brain. The truth of the matter is if I had stuck with my morals and stayed a law-abiding individual, in the Wild West, I'd never seize the chance to get by, like EVER. Because in KL, that is, I'm up against villains who will seize the opportunity and overtake me in an unprecedented move, leaving me to wonder how on earth did they make it past me without a single scratch. And baffled as to why it's half past the hour and we still haven't made it through the damn traffic light yet. Could I've been daydreaming? For that long? It's possible.

"Our Children Are Watching"

I am perfectly aware that something has got to give, and soon. Or else, possibly one of our kids are going to grow up to become a legendary superlative villain, with severe road rage issues. Like their Momma. (See below.) Who when behind the wheel is on the death-defying mission from point A to point B.

Taking our kids to school every morning is becoming something like a Marvel Comic scene...

I proceed to walk out our front door. Everything appears to slow-down in cosmic mode as if I'm entering sandman. I'm walking steadily and confidently into an abyss of smog. We're on the page where we're getting inside our vehicle, dreadfully predicting a war-zone of hell, battling traffic on the streets of Malaysia, better-known as the streets of "Malay-tham" City. I hear a fainted voice in the cloudy distance. “DON'T FORGET YOUR PURSE, MOMMY!” I quickly run back inside the house and grab my effin' purse (always something), holding weapons of mass destruction. "Uhhh...Thanks, sweetie", I reply cautiously in a subdued voice.

I have to be extremely careful. I'm psychologically prepared and ready to commence battle with a potty mouth half-cocked and fully loaded, ready to ignite at anyone who dares to push my buttons. I'm sporting the Look-To-Kill on my face that I'm pretty sure reads, "Don't fuck with me, Morons, or else." If they dared, they'll have realized too late in the game that they've messed with the wrong bitch on the wrong side of the planet.

Swiftly approaching a swarm of fruit-flies riding motorcycles. Luckily, my intuitive sense tells me to check all three of my rear view mirrors and turn my head, so as not to pulverize one of them named 'Ahmad' (made-up name), who's sporting flip-flops buzzing around in my blind-spot on a so-called motorbike that spells DISASTER!
Mission accomplished.

AWAS (CAUTION! ONCOMING MORONS!) I'm weening through in a zigzagging motion to avoid a head-on collision. Because the impatient Morons on the oncoming lane have absolutely no patience and cannot stay-put on their fucking side of the road. Apparently, the MORONS desperately feel the need to pass-up vehicles to be at work on time for 9AM, only to leave again for breakfast at 10AM! "LOOK, KIDS, IT'S SANTA!" I've successfully distracted the kids, inconspicuously shot-the-bird at every moron, and managed to get us through safely.
Mission accomplished.

In Malay-tham City, it means STOP, BUT ONLY IF YOU'RE A CHICKEN. I'm no Chicken. And, when pigs fly, the Obama Care actually works, my mom wins the lottery, and a Malaysian officer happens to pull me over for running a BERHENTI sign, with a deranged look on my face, I will ask them, "Why Berhenti?", "Why not join the majority of the planet and spell it S-T-O-P?" "Apparently, OFFICER..." "Villains, 'Chang', 'Feng' and 'Lee' (made-up names), aren't getting it either." 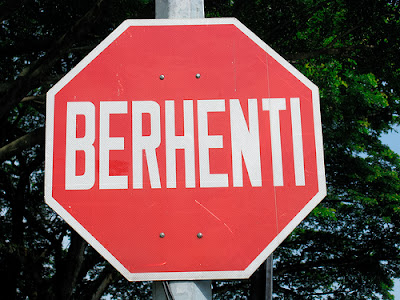 Dreadfully approaching bottleneck traffic. This refers to 10 lanes opened on the tolls, then having to SQUEEZE your way into 3 lanes, leaving you baffled once again. I'd love to know who were the brilliant, undermining authorities and developers who came up with this ingenious plan. I'd like to get together with the imbeciles, probe them over whiskey, AND A MACHETE.


Posted by pokerfacemom at 6:57 AM