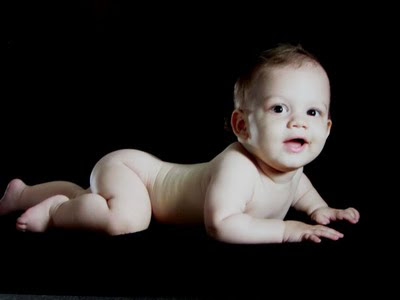 So here it is! The professional portrait that everyone (in the family) has been waiting for! My baby boys butt shot! And may I say, what a gorgeous butt it is! He got it from his "one-and-only" Mommy, passed on to me by my deceased blessed grandmother on my father side. I wish I can get paid a million dollars for this butt shot. It will compensate us, and some, for the past couple of months expenditures.

I mean, when it rains it pours! Everything seems to happen all at once! Indubitably, I blame it on karma. It began on an unforgettable evening of 'irreconcilable differences', when my coffee pot shattered into a million pieces, as I placed it ever so gently into the sink. Okay. That's a lie. I flung the fucker into the sink!

Have you ever felt the urge to scream so loud from frustration that it can possibly shatter glass? Well, that's how I felt on that particular evening, and thank God my children were no where near me at the time. FYI, glass shattering from screaming only happens in the movies. But with added 'special effects' and a little imagination, it can be fulfilled and feel so exhilarating! This unusual behavior only happens once in a blue moon. So I don't think it's a problem that needs to be dealt with. I think you're basically a freak if you don't show any type of emotions what-so-ever. I suggest to let it out when needed or you'll be walking around with a bomb stuck up your ass waiting to explode, nor could it be good for your heart. I can't imagine what kind of kitchen appliance I would have laid my vengeance upon if I would have had a bomb waiting to explode.(figuratively speaking)

As I said before, I believe karma has something to do with the sequence of unfortunate events that has happened in the past couple of months. I won't go into any details about the "act" of karma. But I will say that one argument led to another, about family, business, and money, a combination that is most certainly a big no no! A lesson learned not once but twice. Third strike and our new nick name is 'jack ass'!

So for the past few months, karma, laid her vengeance on us. Besides a negative bank account, my most friendliest, lovable dog, Lucy, suffers from on-going bladder infections, developed 50 something bladder stones, some the size of marbles, and had to go under the knife to get them removed. Gia, my adorable 9 year old bitch, is needing a dental cleaning, like now, or she'll lose most of her teeth. Elie, my 3 year old rat terrier, needs a dental cleaning too. She's prone to getting plaque built-up and has to get her teeth cleaned at least twice a year. Did I mention dogs are like kids, they'll drain your bank account. Have that in mind if you should ever consider having pets or children. Last but not least, my oven, it decides to retire after 6 years of baking.

What do I have left in the after math of it all? A 'Well Spent' ( I keep telling myself) million dollar butt shot picture of my beautiful baby boy, which I will treasure for as long as I can. Envisioning that one day, he will demand for it to be taken down from, what I call, 'The Wall of Fame' to spare him from, what he calls 'The Wall of Shame".

Just a little Wiki insight on the subject:

Karma means "deed" or "act" and more broadly names the universal principle of cause and effect, action and reaction that governs all life.
According to some religions we produce Karma in four ways:
We are in position to do something about our destiny by doing the right thing at the right time. Through positive actions, pure thoughts, prayer, mantra and meditation, we can resolve the influence of the karma in present life and turn the destiny for the better. As humans, we have the opportunity to speed up our spiritual progress with practice of good Karma. We produce negative karma because we lack knowledge and clarity.(19) 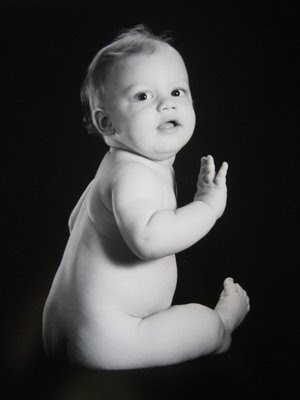 Next time, before I fling that coffee pot into the sink, I'll will practice good karma through positive action and think pure thoughts. I will turn my destiny for the better by gaining knowledge and clarity and do the right thing at the right time. Money will never be an issue for me again. No matter how rich we become, it will never be worth more than having a healthy, beautiful family.
Posted by pokerfacemom at 11:52 AM