What a beautiful, shitty vacation!

What a beautiful, shitty vacation we had this Mother's Day weekend! The beautiful part was where we stayed, which was in a luxurious condominium overlooking the bay, called the Kelly Towers Plantation, in Destin, Fl. We stayed with my cousin who loves the finer things in life and remarkably stays down to earth, her 6-year old daughter, and her husband.

The shitty part was my children. Not necessarily my kids, but because of their age. A 2-year-old and a nine-month-old is not a right age to be traveling. Especially, if the vacation is a short one and the destination takes over 2 hours to get there. It took us approximately 6 hours and a few stops to change diapers and adjust positions.

If you are going to make a trip to the beach with the grandparents and the children, you must stay for at least a week in the same townhouse, condominium, etc., fully equipped. And the building should be smack in front of the beach! Do not separate the family, the grandparents with one child in one building and the parent and the other child in another. (PARENT, as in the husband conveniently decided to stay behind.) Because, you are bound to need something for the child you're with that's in the bag that got sent with the grandparents and the other child in the OTHER building. At this age and the difference between ages, they share just about everything, right down to the size of their diaper. Speaking of which, my 9-month-old is a bit plump and is catching up fairly quickly to his older brother. If you must separate the group, then both places should be equipped with everything, such as a freakin' kitchen! Needless to say, the grandparents and I ran ourselves ragged, walking from one building to the other, every time we needed something.

OK, also, I must say that if you're planning on staying with relatives or friends, make sure you know that person very well. Make sure you know and except their personality, and that they will be able to handle yours as well. My cousin is a bit of a clean freak. Her anxiety builds up with sudden movements, loud noises and crumbs on the counter tops. She also feels that there needs to be a game plan way before you can think of a game. My parents have a personality that is the total opposite. They are "pack rats", "go with the flow", "play it by ear", "whistle while you work" type of individuals. They pick up the mess at the end of a task. If they miss the bus, they'll simply wait for the next one to come along, sort of speak. I fall somewhere in between. Probably because I married a "clean freak", "plan ahead", "get your ass in gear", "wipe on, wipe off" type of individual. I can almost much tolerate any personality. So, I know how to adapt to people pretty quickly. And to prove it, my brother-in-law is living with us at the present time, and I'm tolerating him. End of discussion.

My personality shines when something of "importance" is lost or if I'm running late. My anxiety builds up because of "procrastination". That's when I explode into panic mode! Although, I must say, I do work well under pressure. But if I lose something, because of my absent mindedness, I freak out and I find someone to blame! That's, basically, what happened this weekend when I lost my purse. I can't blame it totally on my disorder. Walking from one place to another like a crazy person, because my kids needed something that was, without a doubt, left in the other building, I believe, had something to do with it. Thank God I found it! I would have had the sumptuous, affluent, languishing retirement community under lock down! Because my purse didn't just simply walk away for God sake! In my mind, we most certainly were burglarized! And it has absolutely NOTHING to do with growing up in New Orleans!

Overall, the vacation turned out to be a learning experience. Thanks to the children. My 2-year-old and my cousin's 6-year-old beautiful daughter had a great time playing together. I was happy to see that our abnormal behavior did not seem to affect them at all. In fact, we all can learn something from our children. As I observed the two of them playing, I noticed how happy and carefree they were with each other. It was like nothing else existed nor mattered to them, but each others company. NO HOUSE. NO FURNITURE. NO BREAKABLES. NO SCHEDULE. NO TIME. NO DISORDERS. NO MIRRORS. NO PRIDE. NO EGO. NO MONEY. only each others presence seems to matter. My child learned so much from watching his cousin this weekend. And I was thankful that their focus was on each other and not on our compulsive personality disorders we all seem to develop as adults and strangely not as children. 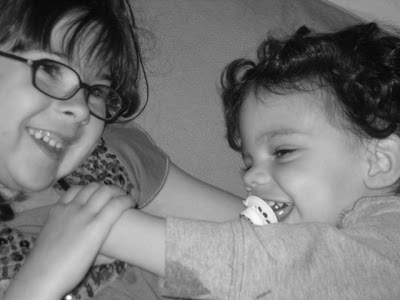 Posted by pokerfacemom at 7:38 AM