OK I'm grateful...Grateful Dead that is! 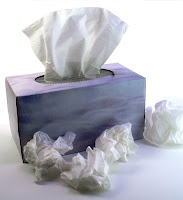 No, I'm not a Debbie-downer. It's just a way I relieve stress. I enjoy every minute of my life. I wouldn't  trade it for the world, but as of now, I have no life... The little time that I do have, I spend it writing on this blog. And yes, I'm hooked!

Today my time was spent changing diapers full of diarrhea of my 6-month-old. He is on antibiotics for an ear infection, that I suspect he caught by his 2-year-old, big brother. Big Brother caught a terrible cold and was diagnosed with croup, which then led to asthma a week ago. We've been doing breathing treatments every 4 hours since then.

Thank goodness they're both feeling better. But now, I'm feeling different bringing them to daycare. It seems like every time they go to that place, they get sick! I don't know what's worse! Having to deal with them healthy 24/7 or having 5 hours of peace to myself twice a week then dealing with them sick for the remainder of the day. The daycare does not allow us to bring them when they are sick. But, if they have a runny nose and no fever, they will take them.

In my opinion, there's misleading information going around about runny noses. Some so-called experts say that it's because they are teething. I strongly disagree with them.  There are at least 320,000 different virus that infect mammals today. Children are more than likely to catch one of those viruses because they don't wash their hands and put their fingers in their mouths. Rest assure that most runny noses are caused by a virus and not because of teething.

All I'm suggesting is to pay close attention to the signs of a toddler who has a runny nose, it may very well be a cold (virus). My toddler loses his appetite, he's whiny, and cannot get a good night sleep. He basically acts like a 2-year-old! He usually has a low-grade fever as well. I've also noticed he demands more juice than most days because of a sore throat.

We are all guilty of it, bringing our children to daycare with a runny nose just to get a break. I'm totally with you on that one! But sometimes I wonder, would we put an end to stubborn viruses if we keep our sick kids home?
Posted by pokerfacemom at 4:51 PM