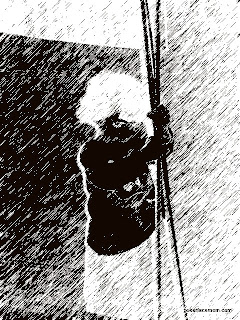 The other day my three-year-old son locked the husband and I out of the house. I knew it would happen sooner or later cause he's pretty tall for his age. He can reach and turn the lock on our front door.

I'm not used to having doors with no double deadbolt lock. Our last house had it on all the doors leading outside and I didn't like the idea of not having them. I'd be much more at ease if I could deadbolt lock the doors with a key so as not to worry about my child escaping in the middle of the night. Paranoid? I call it, 'Staying ahead of the game'.

So, I had to resort to purchasing a bunch of baby-proof-door-knob safety thingys, and placing them on all the doors in the house. I now pray that we never have an uncontainable fire in the house and we need to get out in a hurry. We may have a serious situation on our hands when I'm not able to open the doors -because 'the fucking thingy' (door knob cover) won't open for me. As far as I'm concern, they should warn people about the product and write on the package in big bold letters (WARNING! MAY CAUSE DELAYS in a panic-stricken situation.

It happened on an early evening weekend. We decided to have our back patio extended so that we may be able to enjoy our backyard without having to step on shitty land-mines. It was a chance we took with one of the construction workers soliciting cement work on the side. People here don't fool around. Especially the construction workers. Here in Texas houses are completed in 4 months flat. Rain or Shine.

They did a great job on our patio. Just a few minor things because of communication problems, which I blame myself for. The men were Spanish speaking and did not speak a lick of English. I was the translator between the husband and the workers. I'm usually able to get my point across, but I'll flunk a Spanish test. I don't read or write Spanish as often as I think I should.

Anyhow, it was time to pay the men, and the husband and I both walked out the front to discuss our next project -and for me to translate. We left the children inside happily playing with whatever it is they play with, I can't quite remember what it was. Probably something other than a toy. What is it with kids and playing with everything but their toys? I should buy them a laptop and be done with it. 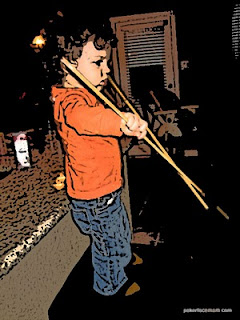 As I was saying. After we finished conversing with the guys out front in Spanglish, we attempted to go back inside. We turned the knob and, low and behold, we discovered we were locked out by the master-minded three-year-old inside. So, what do we do? We look at each other dumbfounded and presumed that this may quickly escalate into a disaster with catastrophic proportions. We checked all around the house for open doors and windows. As we suspected, they were all locked. I had faith, though, that my boy can unlock the door since he did lock it in the first place. The husband walked toward the back to see what he can come up with and to look through the window to see what the little rascals were up to. I decided to place my ear to the front door so I can hear if they were crying hysterically. Surprisingly they were not. Instead, they sounded like two outlaws getting into anything and everything they undoubtedly were NOT supposed to. I can clearly hear that they were playing with bamboo sticks that were in a decorative pot, I'm forever telling them, "DON'T TOUCH!" And were playing 'Kung Fu' stick fighting. I then called out to my three-year-old to come to the front door. I kept my cool and began to infiltrate.

Me: "Mastermind! Come unlock the door for us, baby!" "You locked us out!" "I know you can do it." "Just turn the lock for mommy."
Mastermind: "NOT BY THE HAIR OF MY CHINNY CHIN CHIN!"
Me: "PLEASE!" You conniving little shit!
This lasted for about 10 to 15 minutes.

Finally, after several minutes of negotiating, I was able to convince him by agreeing to all of his requests. 1. Make him pancakes and a bowl of ice cream every morning. 2. Allowing him to stay up late for one month. 3. No baths or teeth brushing for a whole month. Unwillingly, I agreed to all of them but will renegotiate at a later time.

I knew there would still be a problem after he'd unlock the door because of the 'fucking thingy'. I suspected that he would not be able to turn the knob after unlocking it. So, I knew I needed to turn the knob as quickly as I could after he attempted to unlock it. I tried several times but failed and almost gave up hope. As I paused to think about a different approach, I heard bamboo sticks being thrust against the door vigorously. As though my kid was going to pry the door open with the bamboo sticks. Suddenly, the door slowly opened, and I jumped up for joy! 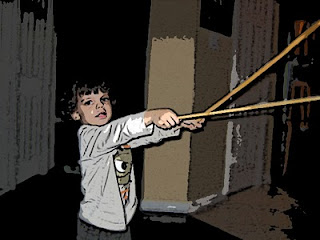 I praised and applauded my son's achievement by accomplishing something, in my opinion, so unbelievable! He amazingly pried the 'fucking thingy' off with the sticks. I didn't know what to think! I mean can a three-year-old do these kinds of things? Or, am I blessed with a child with abilities like no other...? To be determined at a later date. 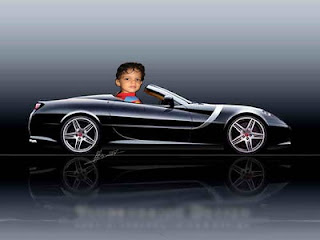 For now I need to come up with a different solution to keep my kids safely contained  inside the house. Although, we don't seem to have a problem keeping them inside, it's them keeping us out. I can only imagine what kind of shenanigans the two of them will come up with when they're old enough to drive. Paranoiac? No. Just STAYING AHEAD OF THE GAME.
Posted by pokerfacemom at 10:29 AM